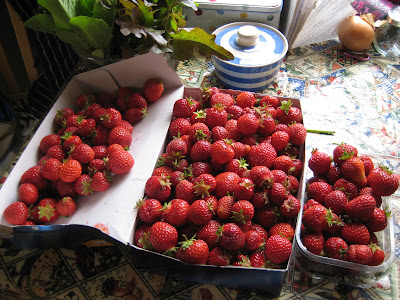 Wimbledon hasn't even started and the single punnet we picked last weekend has grown into a positive glut by this weekend. For such a neglected corner of the plot the rhubarb and strawberries come up trumps year after year! The netting has preserved the crop from the birds, but something is still managing to breach the defences and drag off the odd fruit, or relocate them just to prove a point, it seems. I don't begrudge the odd fruit. (It's just when there is a peck out of every one that I get mad!)

Lettuce is now also in a glut situation, but I will still be sowing now to ensure there is a succession right up until the autumn frosts.

The runner beans are, for the most part, already wrapping themselves around the poles. I haven't had to tie one this year, just guide the occasional wandering one around its pole by hand. They are positive triffids. Here's one 'looking' for a pole: 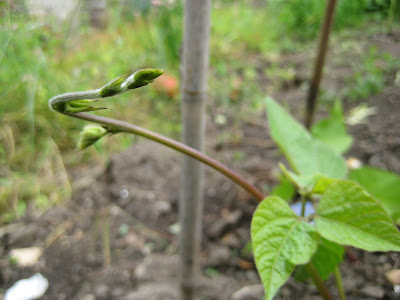 It's so nice to get some return - compensation for all that boring weeding!
Posted by Mal's Allotment at 16:51 No comments: 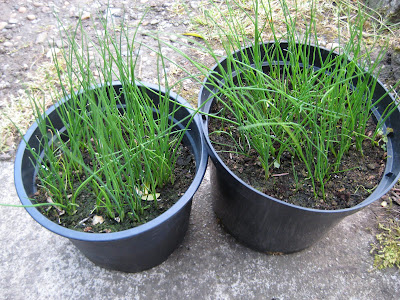 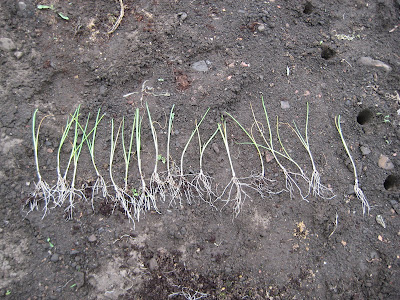 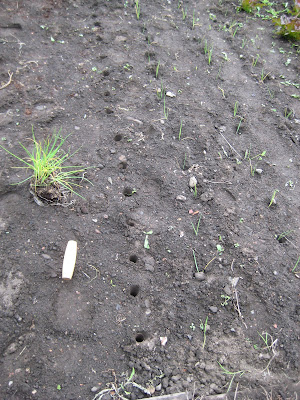 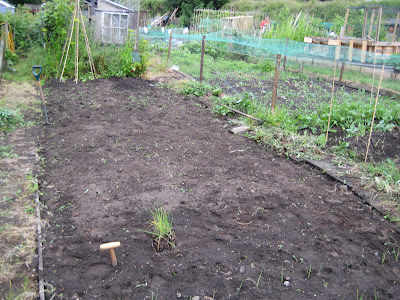 Some snapshots of the current state of play: 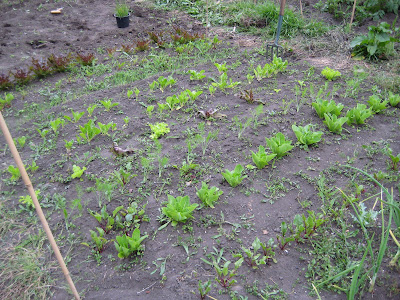 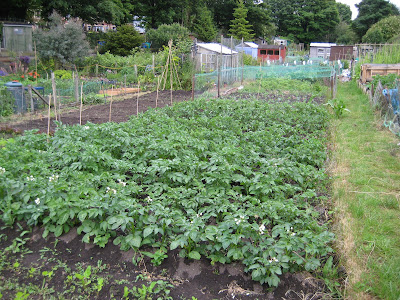 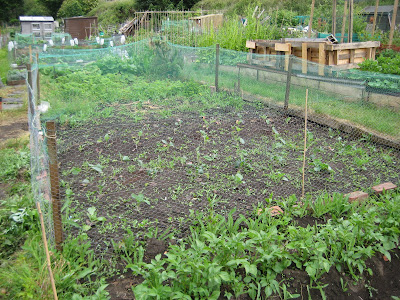 The "others", despite looking so bare now has 5 rows of leeks planted out and 5 rows of Dwarf French Beans (Canadian Wonder) sown yesterday.

More pics to follow but I think I've exceeded the capacity of the blog entry!
Posted by Mal's Allotment at 09:51 No comments:

The Good the Bad and the Ugly

An hour at the plot tonight and my spirits are lifted:

I replaceed the runner bean plant, planted cabbages in between those attacked by the SAS pidgeon and another row for good measure, watered and planted out one of the two pots of leek seedlings. ....and I weeded and weeded.

It was so dry that planting the leeks proved to be a problem. Each hole I made with the dibber just caved in with loose soil. So I watered and tried again, only to find the wet soil stuck to the dibber and the dry soil still caved in. I muddled along, all the same. 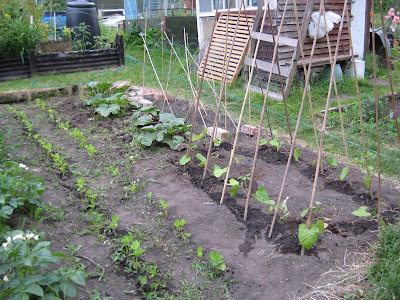 The Bad and the Ugly 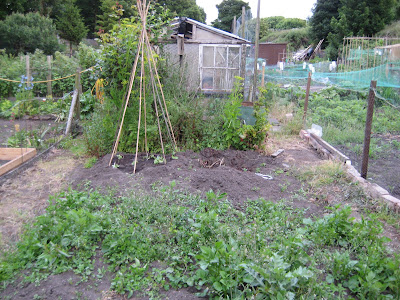 Posted by Mal's Allotment at 23:08 No comments:

So this is summer, and what have you done...

It's summer so why be glum?

The planting plan was going well but... in the meantime the weeds are still growing, so instead of a weed free seed bed I've got, 6 inch high weeds. Everything is dying of thirst. Despite fencing off and netting the brassicas and strawberry patch some rodent is dragging off the strawberries and a pidgeon got under the wire and demolished an entire row of cabbage seedlings. (Those Primo must be tastier than the rest).

On the plus side the runner beans have settled in under their wigwam. Out of 12 plants 11 are fine. The fox took a dislike to one and dug it out. In addition some mange-tout I sowed as an afterthought have come up nicely - and I've had the foresight to provide some protection for them.

The early potatoes have burst into flower, and I've got around to mounding the last two rows.

I shouldn't complain because Monday last week was the first non-weekend, non-bank holiday visit (after 4 days of blazing sunshine and soaring temperatures). Unfortunately everyone else was on a water run too. Tonight was my second weekday visit, spurred on by the prospect of picking strawberries, only to realise that things are getting out of hand.

My target, which I haven't given up on yet, is to get the whole place planted up and weeded by the end of the month - More weekday vists beckon.

Photos on hold for now.
Posted by Mal's Allotment at 21:29 No comments: