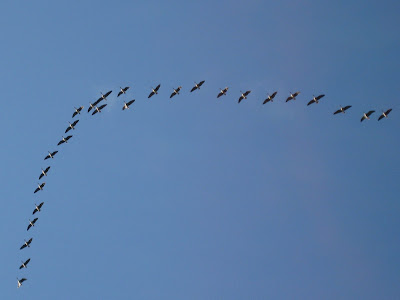 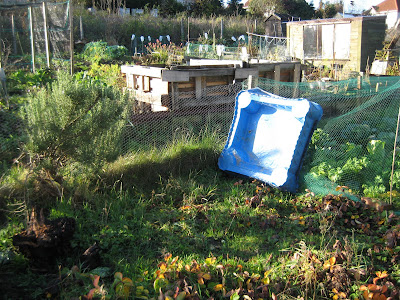 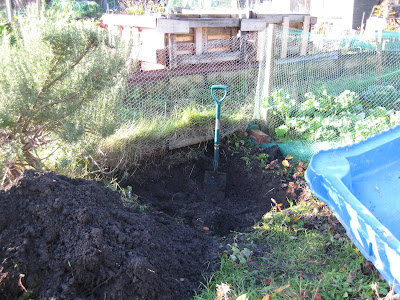 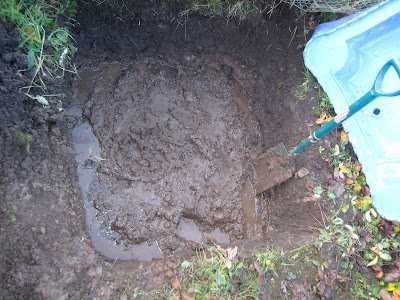 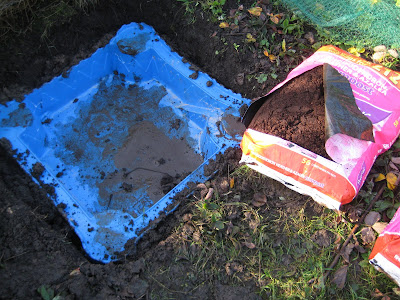 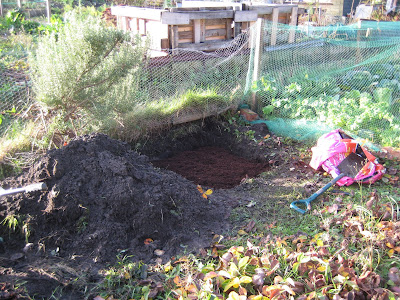 Now maybe tomorrow I'll turn my attention to the rest of the neglected plot!
Posted by Mal's Allotment at 16:21 3 comments:

The problem with the drying beans Canadian Wonder (aside from the poor rate of germination) has bean that they didn't dry before the winter weather arrived. I've accepted the inevitable and brought them home to dry. Now where can they go? 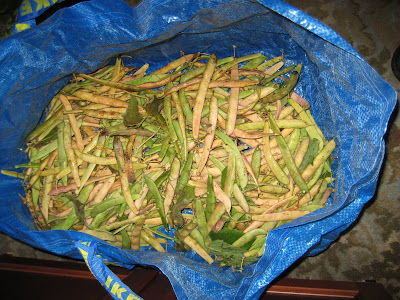 Remember the CD racks I set up in the shed to chit potatoes...? 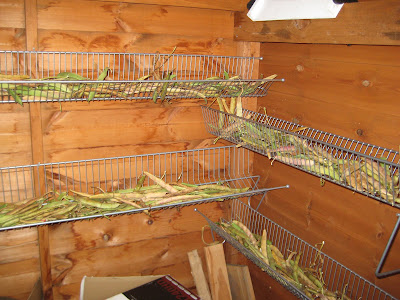 ...and those string vest bags that the shops have rediscovered... 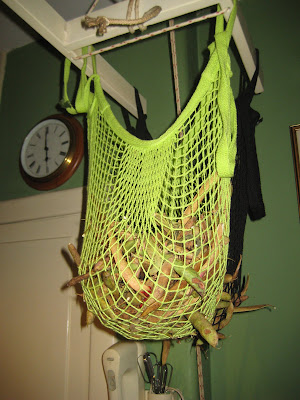 Forget Christmas Pudding weekend, next weekend should be "podding weekend"!
Posted by Mal's Allotment at 19:15 1 comment:

I’ve just measured the pH of the soil across my allotment and I am a bit mipHed. The one area I limed at the beginning of the year showed little or no dipHerence compared to the rest of the plot! Either I’m wasting my time or the hungry brassicas have gobbled up all the lime I put down. The other pHinding is that it’s all too acidic - at a dismal pHive point pHive on average. (OK I’ll stop that now) Well at least I know how to provide the biggest boost to the veg next year. I’m going to dose it up big style with lime this winter (except for where the potatoes are going). Here’s a link to a site I’ve pHound (I lied) with some of the best grapHics demonstrating the effect of raising the pH into the zone where the soil nutrients become available.
http://www.blogdivvy.com/growing-vegetables/soil-ph-for-garden-vegetables.htm

Has anyone ever used the pH tester kit involving a test tube? It seems terribly fiddly to me, and requires some subjective judgement, although it is always the standard recommendation in books! I’ll stick to my probe and meter. It allows you to take as many readings as you want quickly and at no extra cost. It certainly reacts differently to different soil, but sometimes I do wonder if it is correctly calibrated, as I’ve had it for years.
Posted by Mal's Allotment at 19:43 3 comments:

It's worth looking back.

Being a weekend gardener the winter is important if you are to keep ahead of the weeds in the summer!

I see I started my blog in January doing the work I should have done in November! So this year I'm going to start in November: digging in manure, liming and fencing off the brassica patch ready to be topped out with plastic netting.

Planning and ordering seeds. Now these are the fun part of allotmenteering! I'm going to treat myself to a few experimental purchases. Ooh it feels like Christmas has arrived early! I couldn't resist picking up a (tiny) bag of 'roseval' potatoes at Waitrose yesterday. I counted them first 15 tubers for £1.49 makes them cheaper than the potato day supplies. But I have to store them over winter safe from frost. Last year's Shetland Black and Edzell Blues from the same source did well so I reckon it's worth it and increases the variety of spuds I'm growing.

My recent activities have been to cadge some paving slabs and some bricks locally. So I'll be reinstating the path that runs the length of the plot.

Some people seem to thrive on building work and spend a lot of time on their projects at the allotment. I resent spending precious time on non growing tasks, but this task is long overdue as the few slabs I laid years ago have slithered sideways and all but disappeared under the weeds.
Posted by Mal's Allotment at 10:56 3 comments: