A novelty this year has been Highland Burgundy potatoes. Considering the disappointing yields on new potatoes this year perhaps the biggest surprise was that they came through well, along with the other main crop spuds. Flash photography makes them look rather ordinarily red skinned. After experimentation this picture is the nearest I could get to their daylight appearance:


The skins are rather rough with crazy paving patches and corky spots.  These must be related to Shetland Black. But inside is a novelty. Inside the characteristic halo the body of the tubor is red.
﻿
﻿


And it stays that colour after cooking. (The texture turns from firm to mushy in a trice) Flavour wise it is good , yes, just good. Well you can't expect too much from a spectacular looking spud can you? (And storage may possibly improve them.)
﻿﻿
﻿﻿But, do you know, I reckon this potato is the one for my Borscht!

And here's an update on the tomatoes: 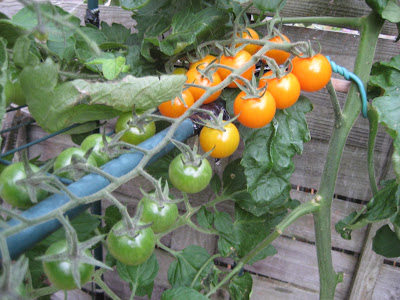 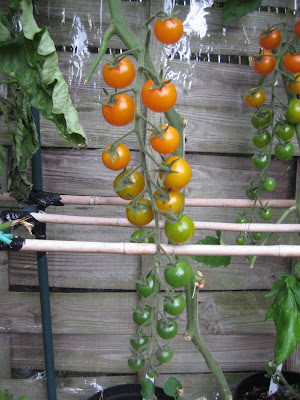 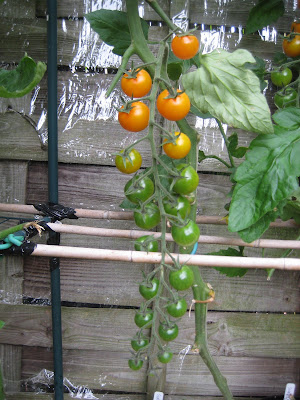 Waiting for the storm...progress report on the tomatoes
Posted by Mal's Allotment at 22:46 5 comments:

Well it pretty much has rained until now. Comparing my pictures from last year the crops are behind by about two weeks. That's bad news for the 'exotics' (peppers, tomatoes, blueberries). Thank goodness I decided not to give any space over to sweetcorn!  Here in Scotland without a proper greenhouse you deserve a medal for growing tomatoes, cucumbers, aubergines, okra etc. My cucumbers have bombed completely. The tomatoes are good for quantity but now I'm biting my nails waiting for them to turn.

﻿
﻿ ﻿
﻿﻿ ﻿﻿  On the plus side the runner beans are going like the clappers, courgettes too, and they haven't yet succumbed to mildew. The raspberries just keep on coming.   Leaf and root beetsa re doing well and brassicas are looking good for the autumn. I've done some successional sowing where the potatoes were but now I've had to accept that it's too late to sow anything in the remaining space where the peas were. So it's goodbye 2011. 2012 starts here with the first manure being dug in.
﻿ ﻿Maybe the weeds will stop growing soon too.
Posted by Mal's Allotment at 14:48 11 comments: