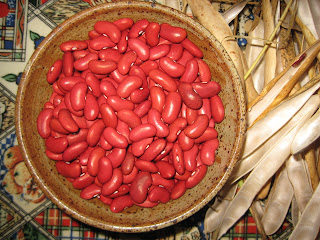 This is to add to the Barlotti beans which we seem to be eating rather than storing. These red beans grew in profusion this year, probably because I started them at home, and provided a bit of support before the winds blew them over: 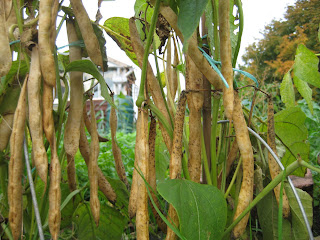 They ripened before the first frost 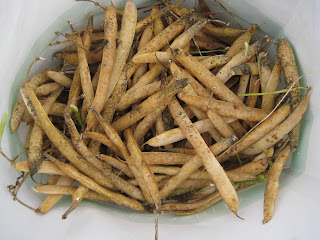 Here is that rogue purple podded climbing French bean. The dried beans don't look very exciting being  mottled white.  Cooked, they compare well enough with other haricots, the pods tasted great raw and had no strings. These are  very versatile beans! 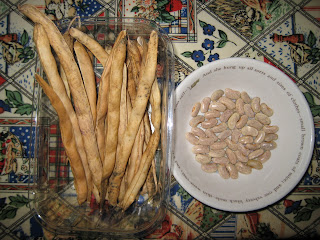 Here's what they look like 'on the vine' (the purple ones high on the poles above the Canadian Wonder). Anybody got any idea what my magic beans might be? 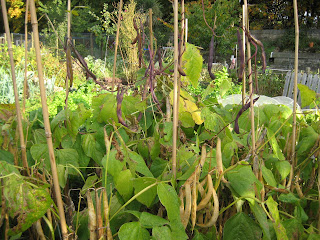 A few weeks ago I was railing against the early arrival of Autumn. Now I have embraced it: 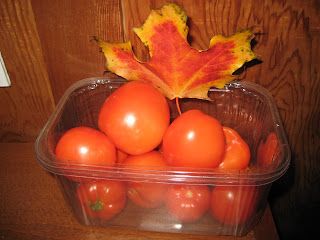 ... and why not? At last a break from the constant battle against the weeds, the pests, the lack of water/sun/heat.  Time to dig the first parsnip, brussel sprout  ...jerusalem artechoke? Well, maybe soon. 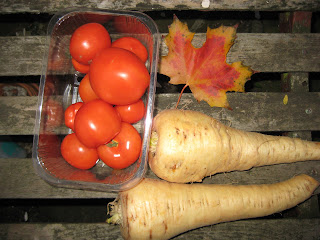 ...and the first seed catalogue clomped onto the doormat this week.  Ah, the promise of perfect effortless results and the prospect of  hours choosing which particular ones fit in with your plans. (Far too many from my experience.)   Perhaps its time for my annual inventory of what's left over and what I've saved myself  this year, before making out this year's order.
Posted by Mal's Allotment at 20:13 5 comments:

How to string onions

First grow your onions...easier said than done in my experience. I tried growing onions from seed for the first time this year. They are an Italian torpedo shaped one. They didn't grow very big but there were just enough to make a string. Globe shaped ones would be a lot easier to make a decent string.

Anyhow here's how to string your onions.
Cut a 4 ft length for a two foot string.

Fold it in half and tie the closed loop end around the neck of your first onion. 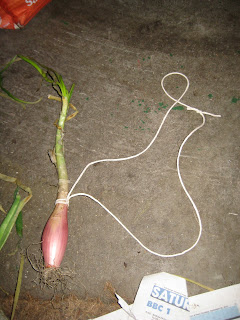 Tie the two loose ends together to form a continuous loop.

Hang the loop from a peg with the onion weighing it down from the bottom. 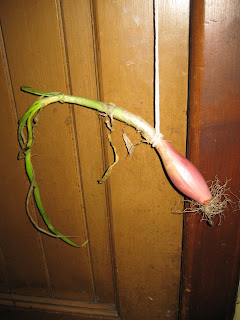 Take your second onion bulb and hold it next to the first.

Feed the onion top through the loop from front to back and then wrap the onion top all the way around the  string to the left and then around the string to the right in a complete figure of eight maintaining downward pressure as you go. Leave the excess dangling. It can be trimmed later once well dried if you are worried about appearance. 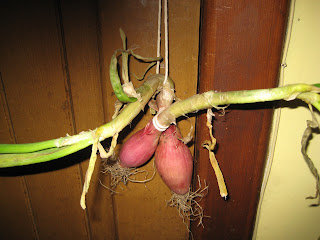 Now take your next onion and in the same way wrap it around the right and then the left strings with the bulb dangling alongside its neighbours.

Carry on with successive onions. 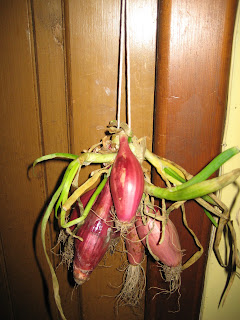 Once you have run out of onions or feel the sring has got too heavy, take the string off the peg and tie a knot shortening the string loop to the top of the onion leaf  plait. 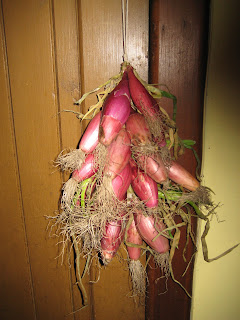 If I can do this with these torpedo onions anyone can do it with ordinary ones!

I learned this technique from "Vegmonkey and Mrs" a blog that stopped over a year ago - I'm keeping the information flowing around the net.
Posted by Mal's Allotment at 22:50 9 comments:

And in the Red Corner

After much agonising I got most of my tomatoes to ripen,  indoors in a plastic carton with rotting bananas to help! I was careful to label a couple of them so that I could do a flavour comparison.  On the left Ailsa Craig on the right, Moneymaker.  Once they had both ripened I set about the task of judging. 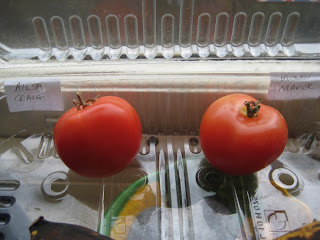 They looked pretty similar on the outside: 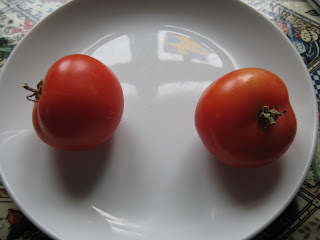 They looked pretty similar on the inside: 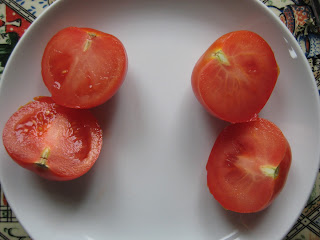 ﻿The tasting verdict - You can't really tell them apart! Sad to say neither of them had the taste of Sungold.
Still with the betroot and cucumber they made a  really refreshing platefull! 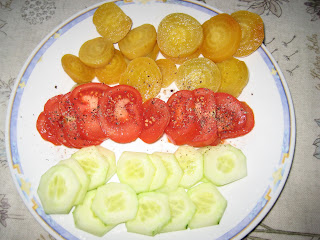 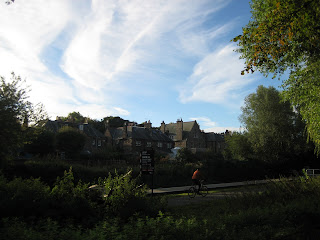 If you look to the right of the sky you can see him, blowing!!!(?)
Time to get on with those autumn harvesting jobs.
It's goodbye to these: 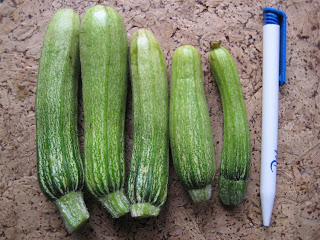 And hello to these: 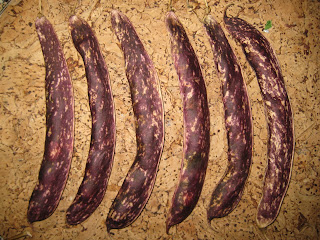 Every one is unique and a thing of beauty! 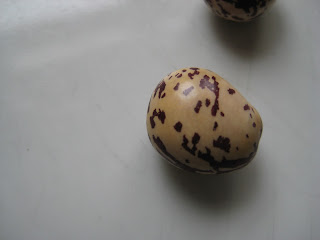