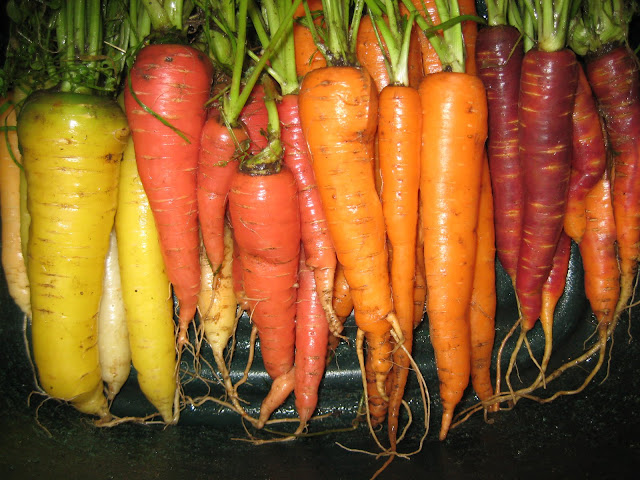 Back in February I blogged about coloured carrots


So, aside from two nets of 'normal' carrots, I sowed a third net of four labelled coloured varieties.
Well today the net came off and I dug up a sample of each and subjected them to a blind taste test.

From left to right:

Rainbow: Yellow white and pink - top marks for taste - little or no splitting
Healthmaster: Healthy name but could do with a spoonful of sugar. Low yield, splitting.
Sugarsnax: Good yield. Despite name not as sweet as Rainbow or Purple Haze
Purple Haze: Looks good, tastes good, some splitting.
Posted by Mal's Allotment at 20:58 9 comments:

I have recently rekindled my enthusiasm for rustic breads, after getting a bit bored with the predictabilityof the  bread machine. This currently represents my proudest achievement:﻿
﻿ ﻿
﻿The impetus for this has been the purchase of a baking stone (a ceramic tile heated up in the oven onto which the risen dough is deposited).  Strangely a breadmaker mixed dough removed from the machine and then baked  on a stone for baking tastes completely different to the standard machine loaf. If, in addition, you save a small amount of your dough from one day to the next you can reduce the dried yeast to a minimum and the taste and texture is transormed to another level.
But on the way adjustments (and some experimentation) are required.
Firstly rising times may need to be varied. A slow rise can be adventagous as you can leave the dough to its own divices until you have time to fit it into your daily schedule.  Secondly you have to rise your dough on something else while the baking stone heats up and then transfer the fragile risen loaf onto the stone. Sounds simple but this is the area I have needed to experiment most with. Due to my tendency to raise the loaf above the oven (while the stone is heating) the dough can get a bit too warm and spongey and so hard to move, without losing those precious bubbles that make the bread light and airy. The third area of experimentation is, or should be, the fun bit - slashing the loaf to allow for controlled bursting of the crust. In fact there is an art to this as the picture below shows.  This is the same dough divided and treated in two different ways. The one on the left was round but got a bit squashed as it was slid onto the stone. Because it was baked with the same side up as during the raising the skin on the dough persisted and was dissapointing.  The second bageutte shaped loaf stuck to the baking sheet it was being raised on and had to be reshaped and given an extra rise on a now heavily floured backing sheet. Then it was rolled off the sheet onto the stone so that the soft underside was exposed and given a quick multiple slashing with the scalpel I reserve for this purpose. The results have convinced me of the need to (gently) turn risen dough over rather than slide it from the baking sheet to the stone.
Below is a risen dough, resting on greaseproof paper on a baking sheet. There's a generous amount of rice flour sprinkled around it to stop it sticking! By sliding your hand under the paper the risen dough can be rolled off onto the stone with minimal deflation.


﻿﻿﻿ ﻿﻿﻿
Here's  an underside view of a baked loaf that demonstrates what happens when you try to slide an overproved round loaf which is partially stuck to the baking tray onto the stone. It's a bit like a crash. On the positive side this does however demonstrate what a beautiful bottom crust the stone gives you!!
Hope you enjoyed my little excursion into the home breadmaking domain!
*Strictly speaking I should call it a "sourdough hybrid"

Great news: the runner beans have started cropping. We've had them at the table for four days in a row now -  without any grumbles.  It's only one out of five wigwams producing at the moment: Painted Lady (more of which below). Of the other four two are Barlotti Beans for drying and the other two are my "Malagrowther" beans: climbers that appeared in the middle of my dwarf French beans Canadian Wonder. I guess they are a cross or a reversion and my research suggests the closest match is "Windsor". These climb, have purple pods and mottled creamy coloured seeds. They also have lovely flowers:
﻿﻿
﻿﻿
An old favourite with beautiful red flowers is Scarlet Emporer.


But first to crop is the two tone Painted Lady


Someone (Hi Tany) asked if these were a novelty. In fact they are reckoned to be amongst the first batch of runner beans imported from Central America in or around 1633.  In England they acquired an alternative name "York and Lancaster"  representing colours of the two sides of the War of the Roses.


﻿
﻿ There is the perennial confusion in my mind as to the distinction between runner beans and pole beans and climbing French beans. I take the last two terms to be interchangeable.  I read that runners, unlike other climbers,  always wind themselves clockwise around a pole so I'm off to check if this is true of all the varieties I'm growing.
Another curiosity - can anyone confirm that runner beans are not popular in the US? That would be a shame if it were true!

Recent reflection has reminded me why I started a blog. To keep a record!  I've discovered that I have got rather too precious about revealing the true state of play at the allotment.  So I'm going back to my roots. Welcome to the warts and all tour of my plot today:

The internal path divides the plot into a broad side and a narrow side.  The path has been lost under piles of weeds that have never dried out with all the rain we've had this summer, so I'm excavating it:

Starting at the shed end of the wide side (on the right in the picture above) the raspberries are just finishing and the strawberries have definitely finished but require their winter tidy up now. 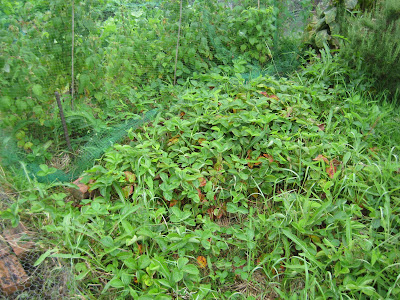 Next along, the broad beans and onions have gone and I'm using the space for leeks, recently planted out. Spot the remains of a row of beetroot - (lack of planning!)

Moving along the three wigwams are runner beans barlotti beans and purple French climbing beans. Sadly the last one ended up as a mixture of leftovers - not a good idea.  By the way I have two wigwams at home too (neither of which is a mixture).
﻿
﻿
Next in line, the potato patch looks a bit shambolic now that the earlies have been dug up and the maincrop haulms are dying back, but I've resown the area dug up with all sorts of autumn and winter possibilities like lettuces, corn salad, radishes, sorrel, spinach beet.  It was going to be green manure but I figured on growing an edible green manure instead! Also the remaining potatoes under the ground should be good judging from the healthy tops they grew. This was in sharp conntrast to the earlies which hardly managed any tops to speak of this year!


﻿ ﻿
Just over the wire is a riot of dwarf French beans. As usual the pods have come on strong but are rather hidden away under the leaves.  Not to worry as most of these are Canadian Wonder which dries nicely to give a substantial mealy red kidney bean.﻿
﻿
﻿ Next up is the area I reached up to when digging in manure last winter when it had leeks growing in it. It is currently my fire/compost/utility area...
﻿﻿﻿
﻿﻿﻿ Beyond that there are the remains of my bumper pea crop!
And at the end of the broad side there are the trusty rhubarb plants that have loved the weather,  and my Cambridge Favourite strawberries.


On the other (narrow) side of the path there are two areas: Carrots, under the  nets, and other roots (celeriac, beetroot, parsnip, turnip and artechoke)
﻿
﻿and last but not least: brassicas under their protective net (together with even more strawberries and some othe soft fruit bushes)

Hope you enjoyed the tour.
There is work to be done, but this year's food returns have been secured. It remains to be seen whether in the Committee's  view this to come up to the acceptable standard.
Posted by Mal's Allotment at 17:15 7 comments:

Reflections on a Life of Grime

﻿﻿﻿I came across my first allotment diary while having a sort out.  It's not exceptional. Most days are blank but some have scribblings about digging in manure, sowing seeds and  chitting potatoes.  Clearly there are high expectation... up until May when all of a sudden the record stops.  With variations on detail, extent and timing this is how every vegetable diary I have goes in the last twenty years.
﻿﻿﻿So I'm wondering why I bother. I don't have time to be a diarist and  I guess this blog is a replacement for my failing attempts to keep a record on paper.  Have I referred back to my notes within the same season or in the next season?  For the most part, to be honest, no! Each year is a victory of expectation over real life.  Conditions vary so much from year to year favouring one crop or another, or early or late sowings of the same cropp.
﻿
Take peas. Last year I grew peas Oregon Sugar Pod and petit pois Waverex.  OSP was a success and the petit pois were a dismal failure.  Undeterred this year - and really just because I had seed left over- I sowed some more this year. The Waverex did stunningly well.
﻿

﻿
﻿
﻿ Here's something I won't forget: the dismal results from my experiment with growing cucumber out of doors. Last year I got three fruit from one of these grown in a plastic greenhouse. This year in the greenhouse and outdoors  - nul points!
﻿
﻿

So to return to the point.  You never know, one winters evening, when there's nothing on TV or the internet,  I might actually review my diaries﻿ and see if there is any useful information to be extracted from them. Normally they are just a short term reminder of what I have done when or a way externalising thoughts and setting reminders for myself. Will they be anything more? I'll let you know.
Posted by Mal's Allotment at 19:18 8 comments: 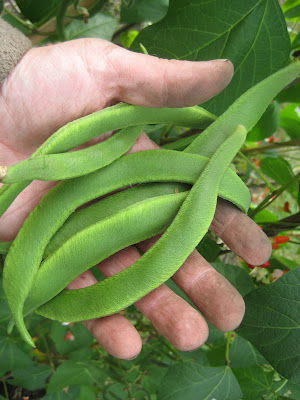 The bees are working away to ensure more will follow. 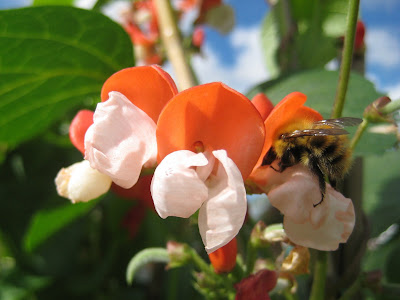 Back at home the Sungold tomatoes are looking good so far.  I've never seen such a long trusses. 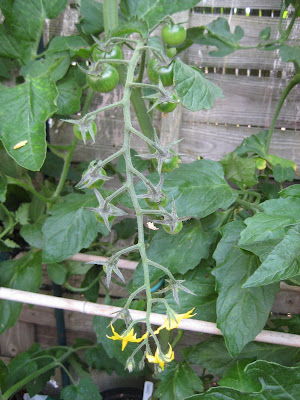 Other good news, under those nets there are carrots.﻿ Germination has been unreliable but the first sowings that survived are now big enough to dig up... and there will be more to follow. 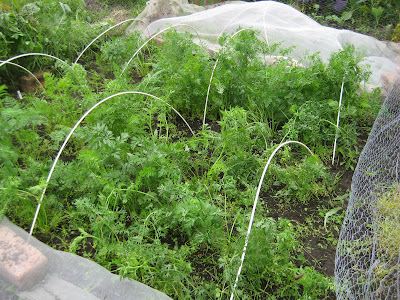