SAD? Bring on the colour

It's been pretty horrible outside in recent days and with the shorter days there's not much to do outside. I'm not very good about Christmas shopping,  or lists, so I dusted off last year's plot spreadsheet and updated it for next year: 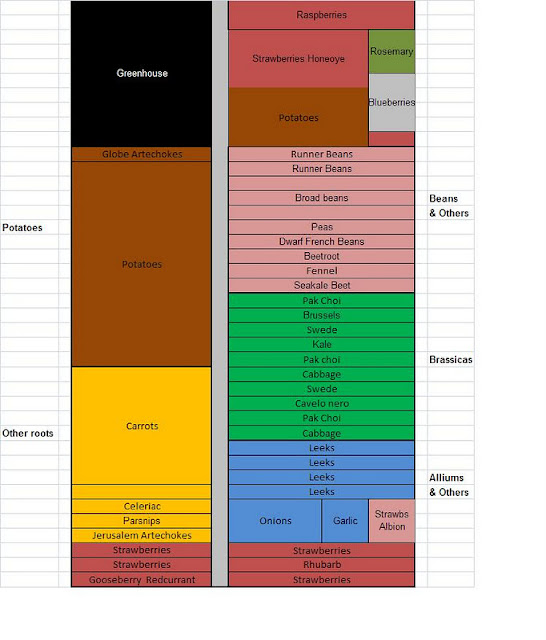 Then I finally got around to listing the seeds left over from this year... and realised I could colour code them too! Anything less than 1.00 is an open packet. The dates are the "sow before" dates 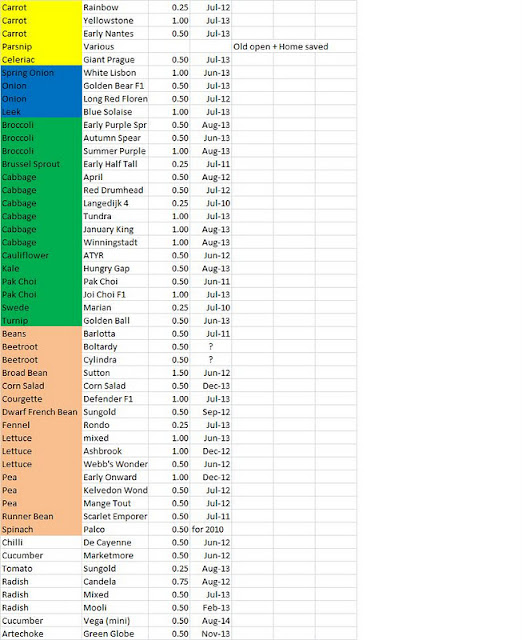 ﻿
Wow, when it comes down to it,  it doesn't look like I need to buy any seeds after all!  Top up on carrots, leeks and lettuce I reckon. Maybe I can still justify introducing a bit of variety with new varieties that mature at different times.  The brassicas never fail before the best before date, but other open packets might not be as reliable. I don't think I will be growing any more chilli, tomatoes or cucumbers after this year's failures.  By the way, does anyone know which group the radishes should go in?
Posted by Mal's Allotment at 21:35 5 comments: 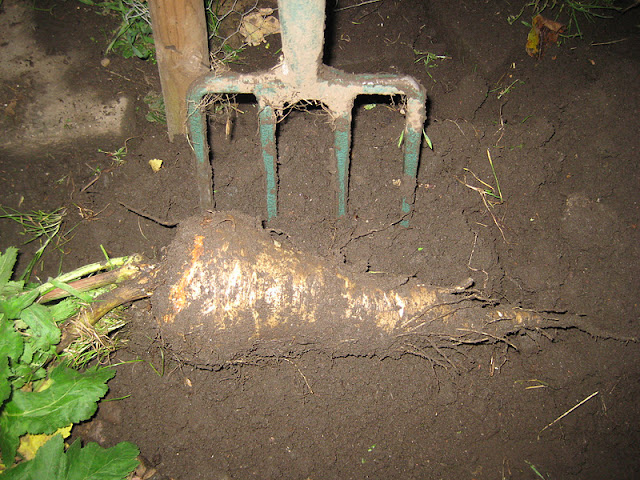 I dug up my first parsnip today. They are a bit thin on the ground this year so I was worried how big they would be.  This roasted up nicely and fed four. (Despite having a larger core than I would have wanted.)
Posted by Mal's Allotment at 22:56 13 comments:

It's late November and the temperatures are "high for the time of year". Good news for the late sowings where my new potatoes had been.  Lettuce 'Cocarde'﻿ 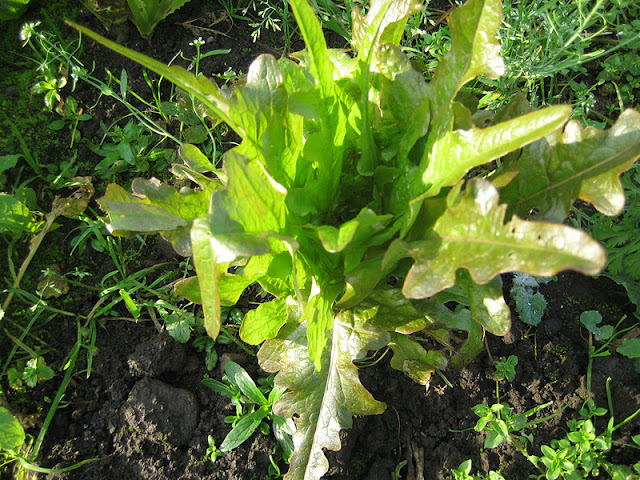 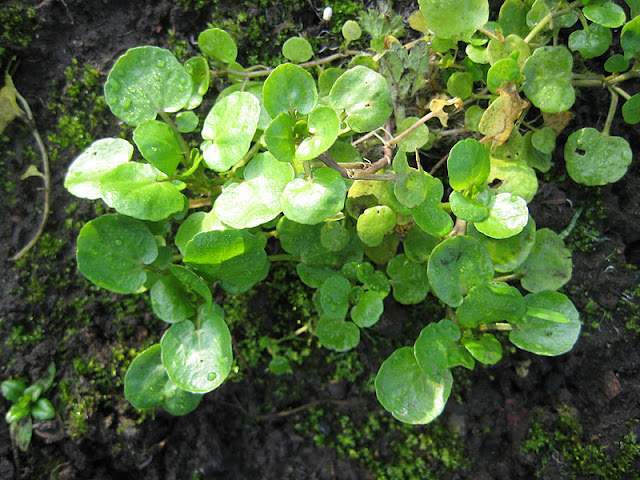 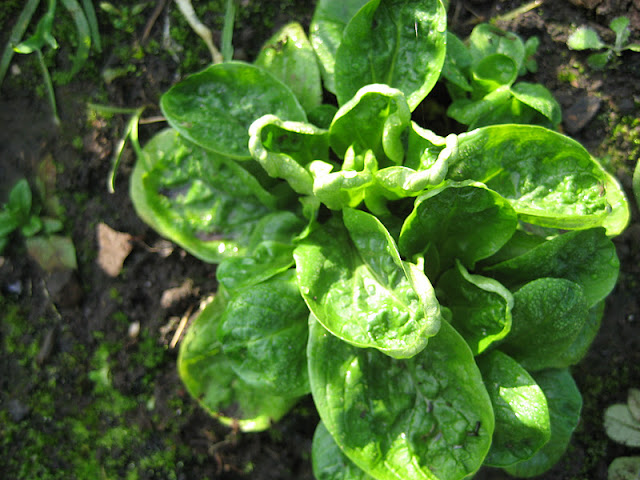 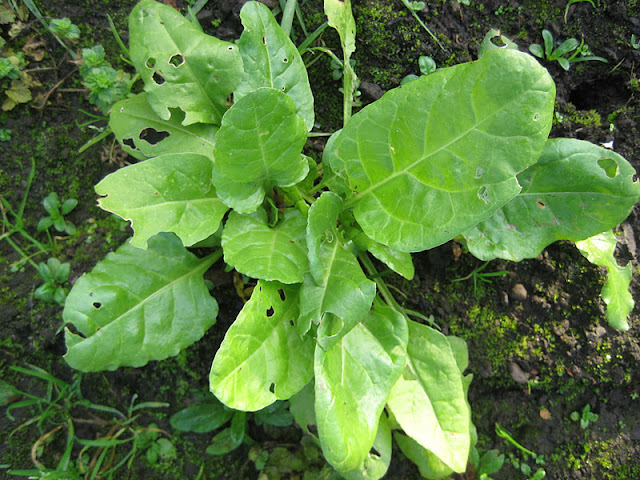 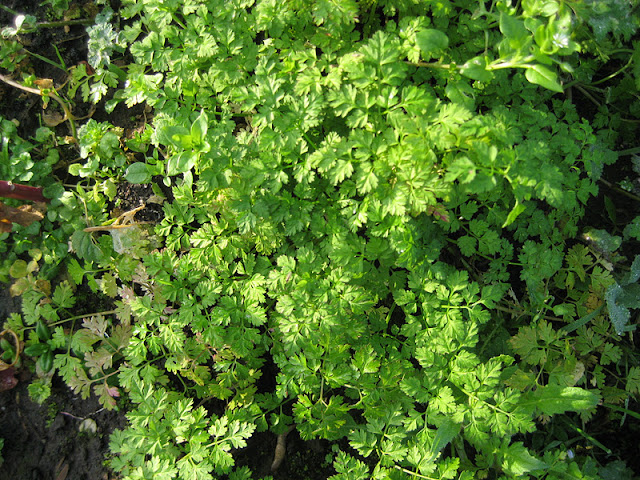 And the real surprise has been a couple of thriving coriander plants!﻿ 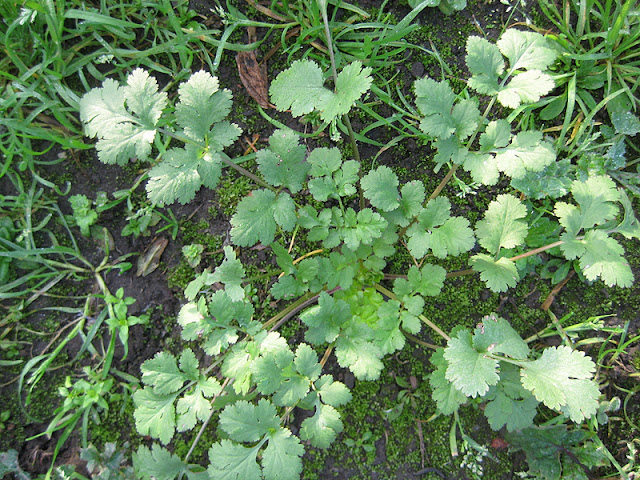 Worming the Compost and Planning for Next Year's Rotation.

It's time to seed the allotment dalek compost bin with worms from my home compost heap. 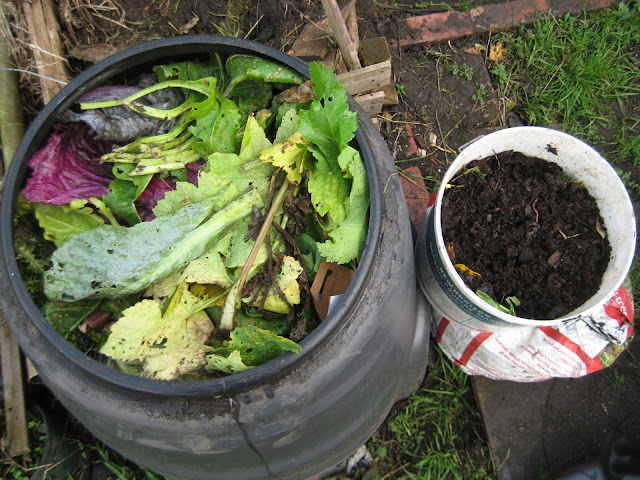 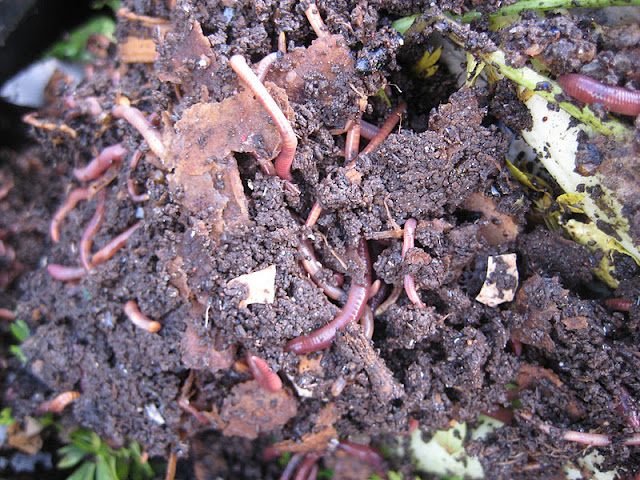 Although I have removed any horseradish or mares' tail along the way there are a lot of grass roots and such like in the allotment compost heap. I'm hopinge the little slithery tikes will help break them down over the winter.

Meantime here's the state of play from a rotational point of view. I now operate a five year rotation of Potatoes/Beans/Brassicas/Alliums/Other Roots.

Next year's bean patch - currently leeks for the winter: 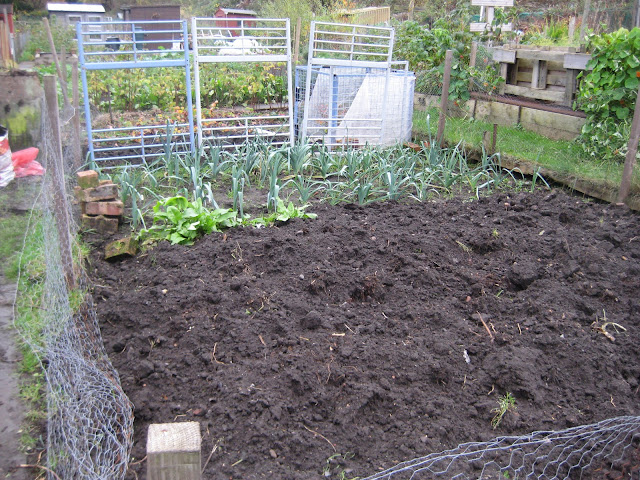 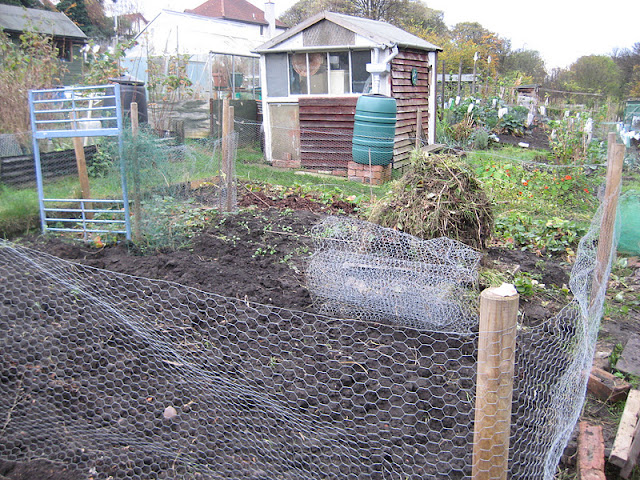 And in between them next years Brassica patch. (Currently lettuce rocket radishes watercress and lambs lettuce - and in need of a weed) 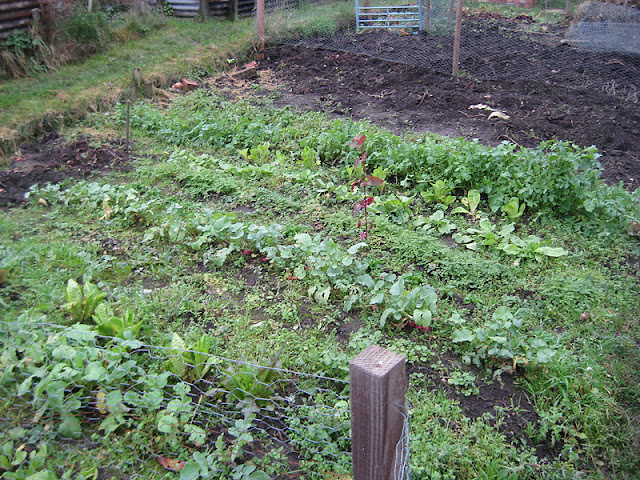 Next year's potato patch.   There are still parsnips and spinach beet growing here alongside the perenial globe artechoke. beyond that all the carrots have gone. 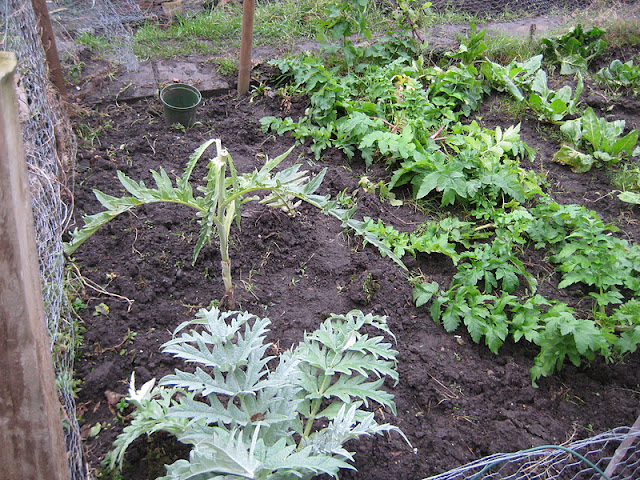 Last of all, this year's brassica patch is to be next year's  ﻿Other Roots  (other than potatoes) 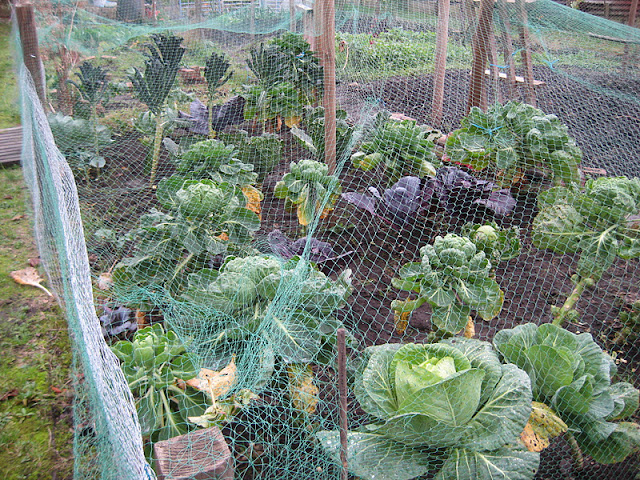 ﻿I will be treating each of these areas differently over the winter in readiness for their new role next year.
Posted by Mal's Allotment at 19:20 6 comments:

Pull the other one

Today I dug up my first home grown celeriac. It had a lot of roots.
﻿
﻿

﻿I also pulled a neep (swede/rutabaga) grown in the very next row.
﻿
﻿
The neep was sown direct outdoors, as a bit of an afterthought, the celeriac got a head start by about two months, started off indoors in my new propogator. It was watered copiously whenever it was dry.

The neep was pecked by pigeons until, when I noticed, I strung a looped string between two canes to distract them. It was touch and go whether to just pull them up at that point.

After trimming off the peripheral root there wasn't much left of the celeriac:

﻿﻿
﻿﻿ When it boils down to it my novelty celeriac was a waste of time, whereas the traditional neep grew away like topsy. Half of me thinks that I'll never try to grow celeiac again.  (The other half thinks I'm going to crack this nut next year - there must be some trick I am missing)

To make matters worse I happened to see Masterchef tonight and virtually EVERY dish had celeriac in it.

p.s. Hope you like the new look and the bigger pictures. Also please note that I've set up a link to my new blog Edinburgh Album which I will use for my photo excursions around town, and around the country, from now on. The Allotment blog will continue, and  if things go well I might even start one just for bread.
p.s. I have started one for bread called 'Rye Smile' and you can link to it through Links above!
Posted by Mal's Allotment at 21:50 9 comments:

Escape to the Pentlands

Lending their name to numerous potato varieties* the Pentland Hills on Edinburgh's doorstep offer the chance to escape the hustle and bustle of city life. Last Sunday we climbed Capelaw.

﻿
﻿ ﻿ ﻿
﻿ ﻿
*This is the flimsiest excuse for putting these pictures on my allotment blog, but as a matter of fact the Scottish Plant Breeding Station was based at the foot of the Pentlands, near Roslin (behind those clouds) from 1921 to 1981 when they produced various innovative "Pentland" varieties of potatoes, many of which are popular varieties today.﻿

﻿ ﻿
Back at home there's graft required at the plot:

﻿
﻿﻿ ﻿﻿ ﻿These leeks will be good eating next spring. (The leaf is sorrel)
﻿
﻿ ﻿ ﻿ First season for artechokes and these appeared:
﻿
﻿ ﻿ ﻿ The brassica patch is in full production:
﻿
﻿﻿﻿ ﻿﻿﻿ ﻿  Another autumn activity, jam and chutney making. Harbinger did manage some ripe fruit but there were plenty of green fruit.