You might be surprised that FEDAGA has suggested to City of Edinburgh Council that rents are INCREASED and that they dispense with funding the scheme for funding a 50% subsidy to the elderly and unemployed.

Here is the FEDAGA document that proves both these: 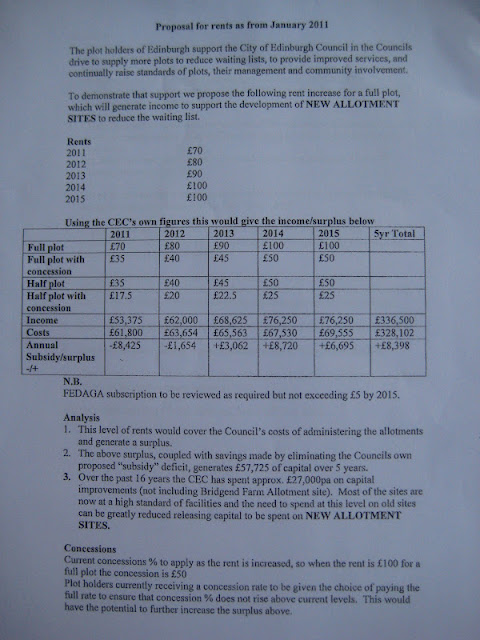 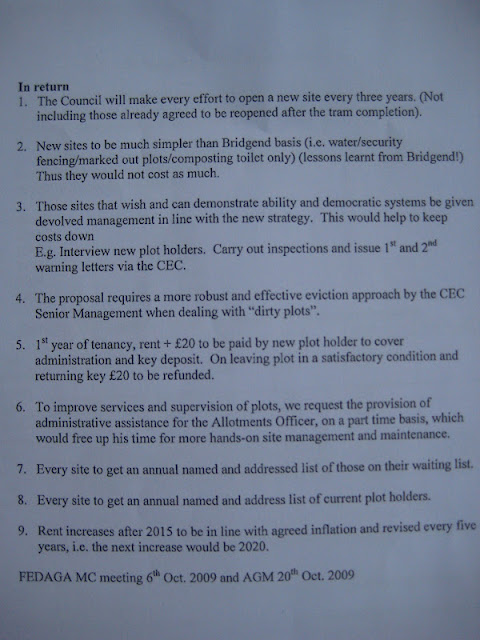 The "Analysis" makes it clear that the Acting Chairman and Show Secretary knew what he was doing when he drafted this:

1. This level of rents would cover the Council's costs of administering the allotments and generate a surplus.

2. The above surplus, coupled with savings made by elimination the Councils own proposed "subsidy" deficit, generates £57,725 of capital over 5 years."

That's the FEDAGA Committee proposing to take £57,725 out of the pockets of FEDAGA members!!!

To add to the irony, there is a limit of one plot per person, so the justification of new plots cannot benefit those existing members whose cash is being allocated for that purpose.

No surprisingly FEDAGAS proposals were accepted by the Council and the program has reached the £80 level this year and will rise to £100.

I don't think the members realise what their executive has done in their name.

If you are an Edinburgh allotment holder you need to be aware of what has been done in your name - It's going to be costing you £60 extra on your rent every year! 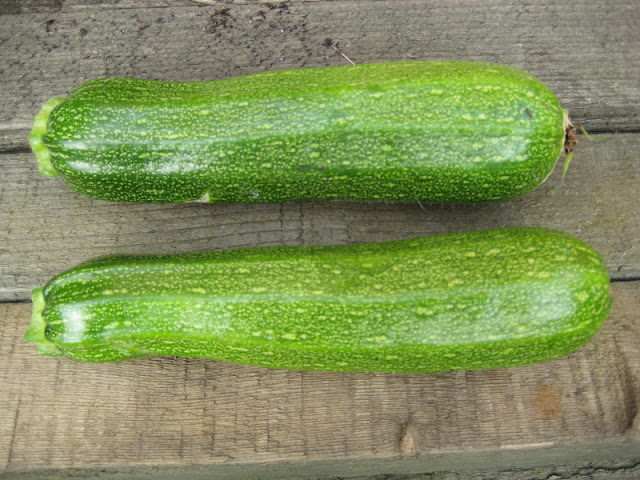 Don't you wonder when the supermarkets offer a 50% discount - Isn't the price of one double what it used to be?

In a similar vein, City of Edinburgh Council offer 50% subsidized allotment plots for those people on pensions and benefits. But they also insist that the allotment pay for themselves. The two goals are incompatible.

By the Council's logic, because 1/4 of the rental income is missing as a result of the "subsidy" everyone's rent has to rise  by 34%  (including the subsidized rate) to make good the shortfall. So the 50% subsidized rate is only a 16% cut at the break even point where income equals outgoings. This is the road we are travelling down in Edinburgh.  The attractive subsidy just comes from putting up rents.

Here are the figures:

Instead as roughly half of the rentals are at the subsidized rate the rental income is in fact £61,000

These costs are greater than the actual rental amount received  (£61,000 as above) but less than
the rental income plus the the subsidy due from the Council (£81,520 as above).

So inclusive of the Council's contribution Edinburgh Allotments already run at a profit. And yet rents are going up £10 next year and another £10 in 2014 up to £100.  By that stage City of Edinburgh Council, having washed their hands of financing the subsidized rates, will be making a fat profit from the allotments.  The allotment holders will be saddled with funding the subsidy and paying the Council a new tax.

But this is not going to be a shock to FEDAGA,  the organisation supposedly representing the interest of  allotment holders in Edinburgh, because the FEDAGA committee came up with this scheme specifically to generate a profit for the Council.  Their cockeyed justification is that by making a profit from allotments the Council will then have a capital fund to purchase new sites.  Effectively the burden of the allotment expansion scheme fall on the existing allotment holders (who cannot benefit there being a limit of one allotment per person).  How this madness won the day is easy to see from the Council's point of view.  From any other angle it is completely crazy logic.   You can buy a lot of veg for £100, and you have to fork out quite a bit to run an allotment, in terms of sweat, time and money. The rent rises are just not fair. Something to discuss at our site AGM this weekend, along with the flooding problem!
Posted by Mal's Allotment at 18:28 8 comments:

No watering this year!

The one area that has benefited from all the rain this year is our normally neglected front garden.  It is north facing onto a busy street and is the one area that is reserved for ornamentals.  Ordinarily I am reluctant to water as I have to cart water through the house or trail the hose through it, never a good idea as you soon discover if you have a leak. But this year there has been no need to water at all! 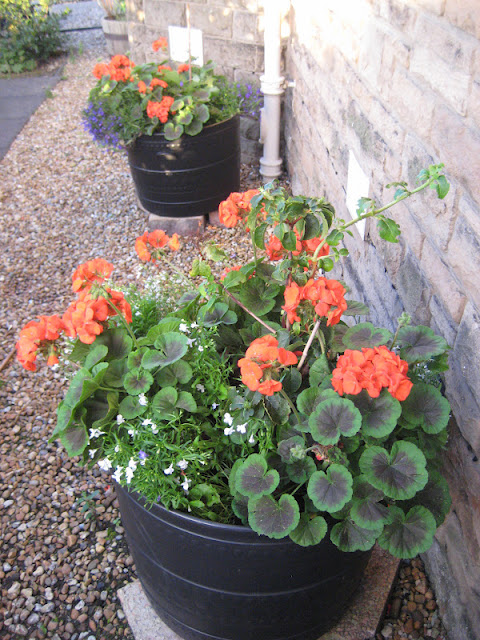 Aside from the tubs we have a couple of hydrangeas, and they love water. They have rewarded us this year with a giant flower show:

So there's always a silver lining, if you look for it.
Posted by Mal's Allotment at 21:36 2 comments:

There's a sense of panic here as the days are noticeably shorter and the nights are cooler. Will the tomatoes ripen?  or the blueberries?

It's time to start picking carrots. Two nets have produced after resowing, but when I weeded the third there was just one carrot!

Thank goodness the runner beans are producing at last!


Perhaps I planted the jerusalem artechoke just a bit too close to the beans, but this is one crop that has thrived in the conditions this year.

My 100 brassicas have reduced to around 90 as the early sprouting broccoli and most the cauliflowers bolted. Today I uprooted the lost causes and weeded the rest.

For the record here's the potato patched ravished by blight I cut the tops off a couple of weeks ago.  No one escaped.


The alliums are looking a bit sorry, but next year's leeks are in good shape for next spring.

The slugs - no horror pictures, but they have been the biggest threat this year.  I would have had a decent crop of late strawberries - but the slugs got there first.  The few in the first picture were all that ewere salvageable. But look on the bright side. At least I never had to water this year!
Posted by Mal's Allotment at 23:57 6 comments: