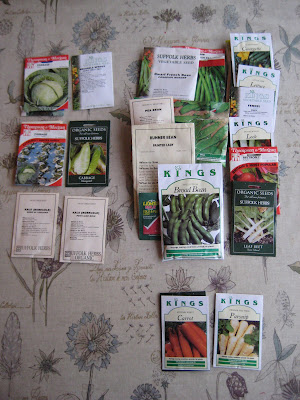 Reading over my last post I see I forgot to mention that the twin reasons for rotation is to a. keep down pests (who like a steady supply of their favourite food)and b. keep up fertility by varying the nutrient demands made on the soil.

Now, big excitement as my seed order lands on the mat. I did an inventory of leftover seeds this year and just plugged the gaps. So including p&p the order came to just £13.40. Some seeds, particularly brassicas, are viable over several years. (Parsnips are notoriously bad keepers and have to be bought fresh each year.)I still have seed potatoes to buy (not by post). Otherwise I have more than enough already to fill the whole plot.

The picture is just to give an idea of what seeds go in which zone. Of course the roots look a bit sparse because that will mostly be potatoes! Given that I have ambitions to fill the Brassica patch this year maybe I have under ordered in this area. By design there are several varieties of cabbage which mature at different rates so as to extend the cropping season. (But I might yet grow a few swedes and try some broccoli.)

Another task I have done this year (in addition the the seed inventory) is to make list of the sowing times as listed on the packets. I'll spare you the detail on that, but suffice to say that in about 4 weeks time I'll start off the 'Roots' patch by sowing parsnips and the 'Others' with broad beans. In the meantime I've got lots of preparation to do!

Yes we had snow in Edinburgh yesterday and today is just rain and slush and horrible.
Posted by Mal's Allotment at 11:24