We're going to have our first rhubarb today! 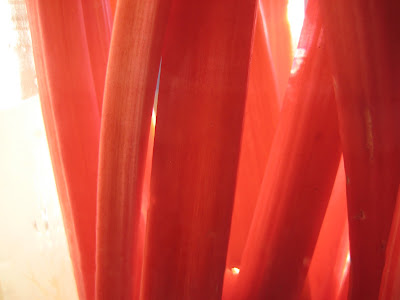 It won't need much sugar because it has been forced. 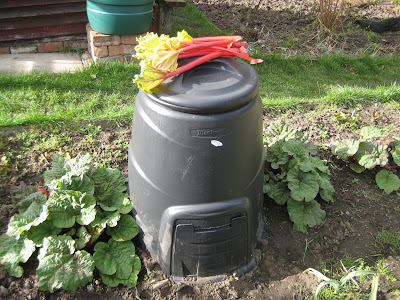 Last year the 'scud' was placed over the clump on the left. Next year I'll be forcing the third clump. The 'outdoor' rhubarb isn't that far behind, but that stolen week or two (and the novelty of the first taste of the season) make it worth it's weight in gold, (which the supermarkets seem to have realised as they certainly charge a premium for it!) 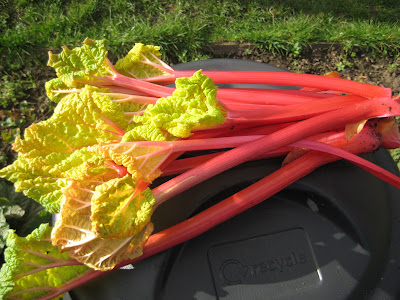 Below is a view from inside the chamber: 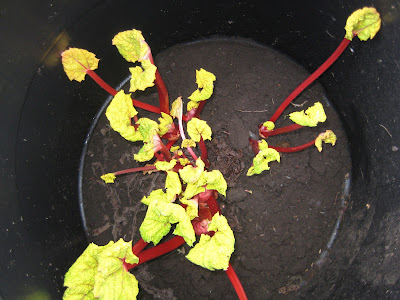 I can't help wondering why "rhubarb rhubarb" has become such a derogatory phrase. Perhaps it dates back to the Victorian rhubarb craze and some people got fed up with rhubarb enthusiasts going on and on about their obsession. On that score you can count me in!
The funny thing is that I don't know what variety we have got. It was inherited with the plot. Every five years or so I dig up and divide one clump in autumn,  planting  out the crowns at the opposite end of the plot. It has gone from strength to strength.  Thinking I had a later season variety (we can pick as late as August!) I decided to buy in a new variety to extend the growing season.  Timperley Early, I thought.  So I places a postal order and two bits of bark duly arrived through the letter box.  I potted them up as instructed before planting out.  One produced a single stalk but shrivelled and died when planted out. The other never showed any sign of life at all and just couldn't be coaxed into life. A waste of money. Sometimes it is worth going to a nursary to be assured of the viability of what you are buying and  avoid this sort of disappointment. The cataloge shows you the mature plant whereas they are selling offsets. Subsequently I have read that although Timperly Early is good for forcing, it is also one of the latest growing varieties too! So probably I managed to order the exact same variety as I was already growing!  Nowadays I've accepted that we've got the right variety for our location and our tastes. Mind you if I could find a supplier of the all green variety Linneas I might just be tempted....
Posted by Mal's Allotment at 10:27