This bay has been a stalwart over the years, but last winter was too much for it.  I feel guilty for leaving it outside now. I cut it back and repotted it in the best terracotta  pot, but have now recognised the futility of trying to resucitate it.  I'll be kinder to the next one.

It's not all doom and gloom on the herb front: I divided the herb bed up like noughts and crosses (tic tac toe)with potting compost for the lines sown with chives and parsley. Each square has been sown with different seeds, which are now coming through.
﻿ ﻿
﻿﻿﻿﻿ ﻿﻿﻿﻿The one exception to the seed rule was rosemary. I plonked 5 twigs into the ground in the hope that at least one would take root. It looks like they all have. Several are flowering.
﻿ ﻿Why do they come two to a seed pod?
﻿﻿ ﻿﻿﻿Pretty enough to grow just for appearances

﻿ Ready for those beans.


The salad bed is taking off too. 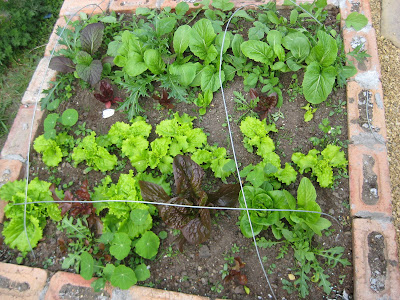 so it's not all doom and gloom.

p.s. After a day of respite the strong winds are back. I hope all is well with my defences at the plot.
Posted by Mal's Allotment at 18:47