Do you know I thought I'd planted all the beans I was going to this year. But I've got a load of pea beans and I need to get some to germinate this year rather than wait another year only to find they weren't viable. So I've soaked the one's I have in water for 24 hrs and then drained them - rinsing them several times a day. The ones that sprouted I've sown in potting compost which I will keep on the dry side this time.

Let's see if it works this time! I wouldn't normally bother but this is a "heritage" variety and I'd like to see if I couldn't keep it going.

On the subject of failure (hate to dwell on it, but how else am I going to learn) my early start on the brassicas this year turned out to be a waste of effort. The red cabbage on the right was sown on 21st March in modules on a windowsill. The red cabbage on the left was sown outdoors (and covered with fleece). Despite its later start the outdoor grown seedlings are so much better!

In fact the whole tray was a bit of a disappointment - except for the parsley and lettuce which I transplanted - hence the empty tray.

So my efforts with starting brassica early indoors have convinced me not to try it again.

The temperature was too hot

The potting compost was too rich for them.

They got a shock when they got put outdoors

I should have potted them up or planted them out sooner

All in all its too much of a waste of time. I'm going to avoid this experience next year.

This was the starting point (in reverse order): 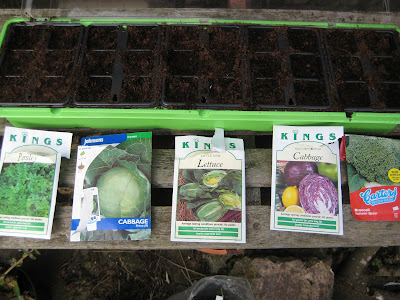 All (brassicas) for nought.

On the plus side - No money spent!